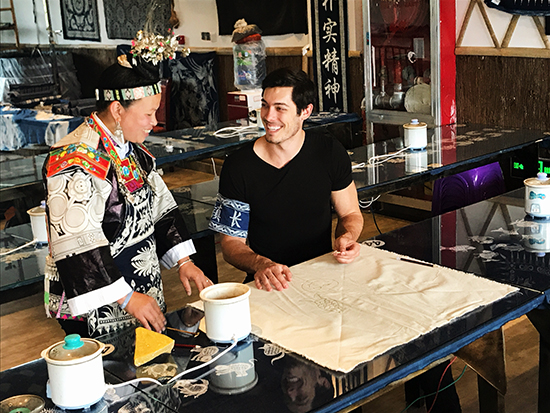 DANZHAI, China, June 6th, 2018 ---Matt William Knowles, a Hollywood actor, recently visited Danzhai Wanda Village and acted as its 40th Rotating Mayor. It was the first time that a Hollywood actor had participated in the Danzhai poverty alleviation program.

Matt William Knowles became popular in China for his work in a number of Chinese films including Deng Xiao Ping at History's Crossroad and Red Star Over China. At his inauguration ceremony, Matthew said, “I am delighted to come back to Guizhou, which I warmly view as my second hometown. 10 years ago, when I was a volunteer English teacher, I was delighted to make a small contribution to local education. Today, I am very impressed by Wanda’s unique model for poverty alleviation under which the Group launched a countywide poverty relief program in Danzhai to push forward enterprise-led, targeted poverty relief efforts. This has since emerged as a highly innovative approach to reducing poverty and clearly demonstrates Wanda’s long-term commitment and resolve to improving people’s lives. I am hugely honored to have been invited by Wanda to serve as Danzhai’s Rotating Mayor and I hope to help ignite the dreams of local kids and promote Danzhai to the world through my visit.”

During his stint as mayor, Mr. Knowles visited Guizhou Wanda Vocational College where he delivered a lecture to local students. During his talk, Matthew recalled his days as a volunteer English teacher in Guizhou, and also shared his experiences in Hollywood. His time in the classroom marked a welcome return for him to his old profession as a teacher. He taught students English by creatively using lines from the upcoming Asura, China’s first $100 million fantasy film in which Mr. Knowles plays a role, and also gave them an acting class. Students were split into different groups and conducted role-plays with selective clips of Asura. In the review session, Matthew encouraged students to aim high and fearlessly pursue their dreams, sharing his own experiences in how to build a successful career. The students were very excited to participate in these activities and were greatly inspired by Matthew’s words. In order to have greater interactions with the students, Matthew took them out to the football field where they played American football together, creating an unforgettable experience for these kids since it marked the first time that they had the opportunity to interact with an international film star.

Following the inauguration, Mr. Knowles participated in a range of activities around Danzhai. For instance, he visited the homes of local farmers and learned skills in Batik art and tea-making, and was very impressed by these unique handicrafts and delicacies. He immediately decided to bring some tea for his friends abroad so that they can also taste the Danzhai delicacy. Later on, Mr. Knowles joined local residents at a bonfire party where he learned the Pheasant Dance and Miao Song. In addition, Matthew also had the unexpected pleasure of being reunited with one of his students whom he had taught a decade ago. The student now works at Wanda Commercial Group, where he is dedicated to the Danzhai project, and he was overjoyed to see his former teacher.

Through his deep-dive into such local experiences, Matthew became a quick fan of Miao culture and cuisine. He was particularly surprised to see how Danzhai had been dramatically transformed from a remote, impoverished county into such a modern and vibrant tourist destination in southwest China.

Commenting on his trip, Mr. Knowles said, “I was stunned by the natural beauty, cultural heritage and modern look of Danzhai. I know that China’s Cultural and Natural Heritage Day is around the corner, and I hope that more counties like Danzhai can emerge in Guizhou. In the future, I will bring my friends from all over the world to visit this beautiful place.” Through his visit, Matthew hopes he can continue to play a positive role in promoting Danzhai and raising the county’s international influence so that its rich cultural heritage can be shared by a much wider group of people across the world.

Danzhai Wanda Village is located in Danzhai County, Qiandongnan Prefecture in Guizhou Province. It is Wanda’s pioneering project for targeted poverty alleviation for Danzhai County. Wanda Group has donated RMB 700 million to build the Miao-style village, spanning 1.5km along the beautiful Dong Lake and featuring 30 unique Danzhai Cultural Heritage projects, Miao handicrafts, Miao delicacies and Miao medicinal products. It is one part of a three-pronged development scheme -- the other prongs being the Guizhou Wanda Vocational College and a poverty alleviation fund -- with the village providing up to 3,000 jobs and a sustainable growth model for the future.

With more than 7,000 applicants globally from the Danzhai Wanda Village “Rotating Mayor” Global Recruitment Campaign, the diverse collection of “Mayors” will include volunteers from the fields of hotel management, architecture, public speaking, academia, the arts, and many other areas of expertise. The “Mayors” will get the chance to contribute to the sustainable development of Danzhai Wanda Village and have real, impactful change for the better.