Miao villages are to Danzhai what canals are to Venice, or classical ruins are to Athens. The most endearing are set within folds of green hills amid sculpted rice terraces, and appear frozen in time, serving as living museums of the culture and customs of the Miao, one of China’s 56 ethnic groups. Others show more signs of modernity, yet the handsome Miao houses, dark timbered with tapering tiled roofs, are as much a part of the landscape as are the vertiginous rice terraces and bulbous green mountains. 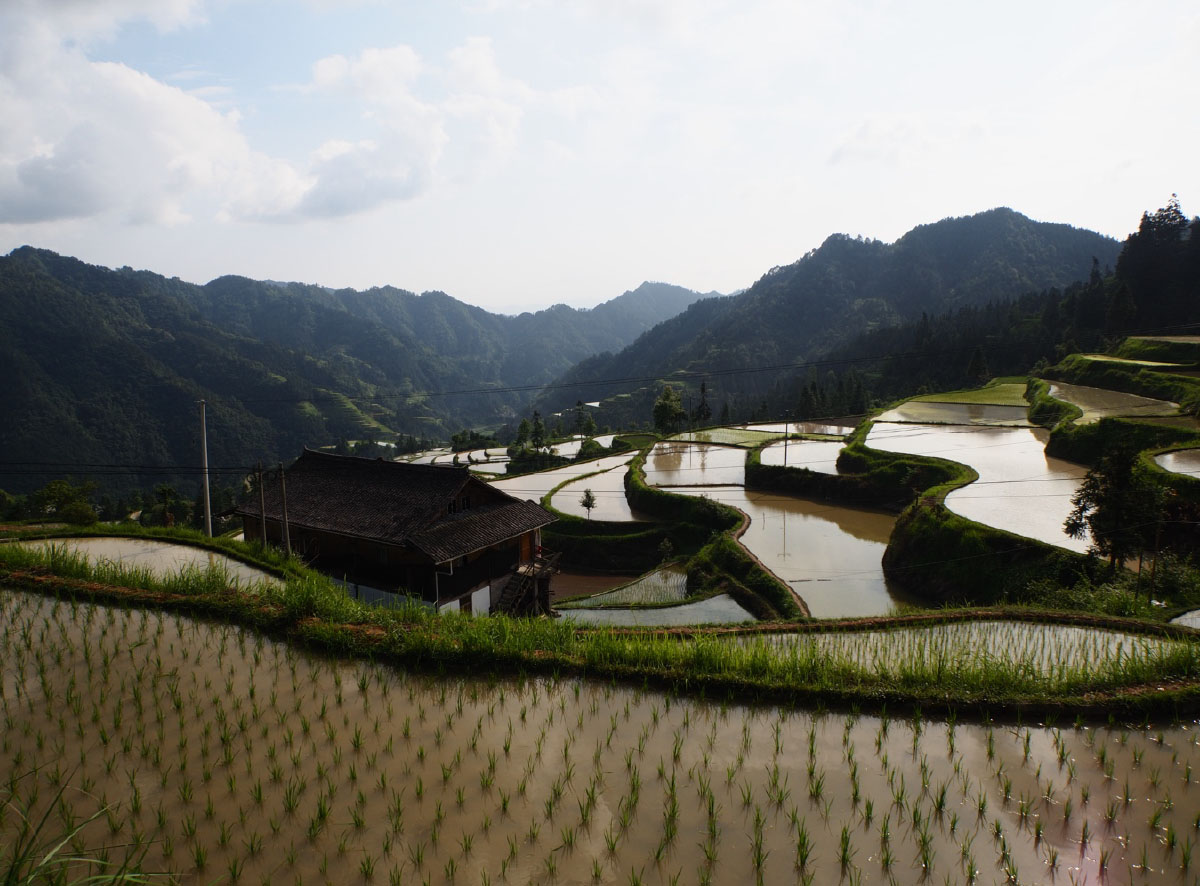 Getting into the countryside

By far the best way to explore the region is via its Miao villages, scattered like seeds over some 350 square miles of undulating landscape in the east of China’s mountainous Guizhouprovince. You can simply let serendipity be your guide and see where the road takes you, or hit up several of the region’s more notable Miao villages such as Paimo, famous for batik (known as la ran in China), the process of using beeswax and dye to create patterned fabrics.

The road to Paimo village runs alongside the Wu Tang (‘dark soup’) river. As recently as the late 1990s the road was just a mud track, and it remains rough going, especially compared to the pristine highways raised on concrete stilts that slice through the province.

Up to two thirds of Danzhai’s villages had no road access until the early 2000s, when thenChinese leader Hu Jintao launched an ambitious program to connect all of China’s rural villages by paved road. In 2019, state media reported the scheme was at last on the verge of completion. More than 1.4 million miles of roads had been laid in rural townships and villages since 2003, and only one village – in southwest China’s Sichuan province – was yet to be connected. 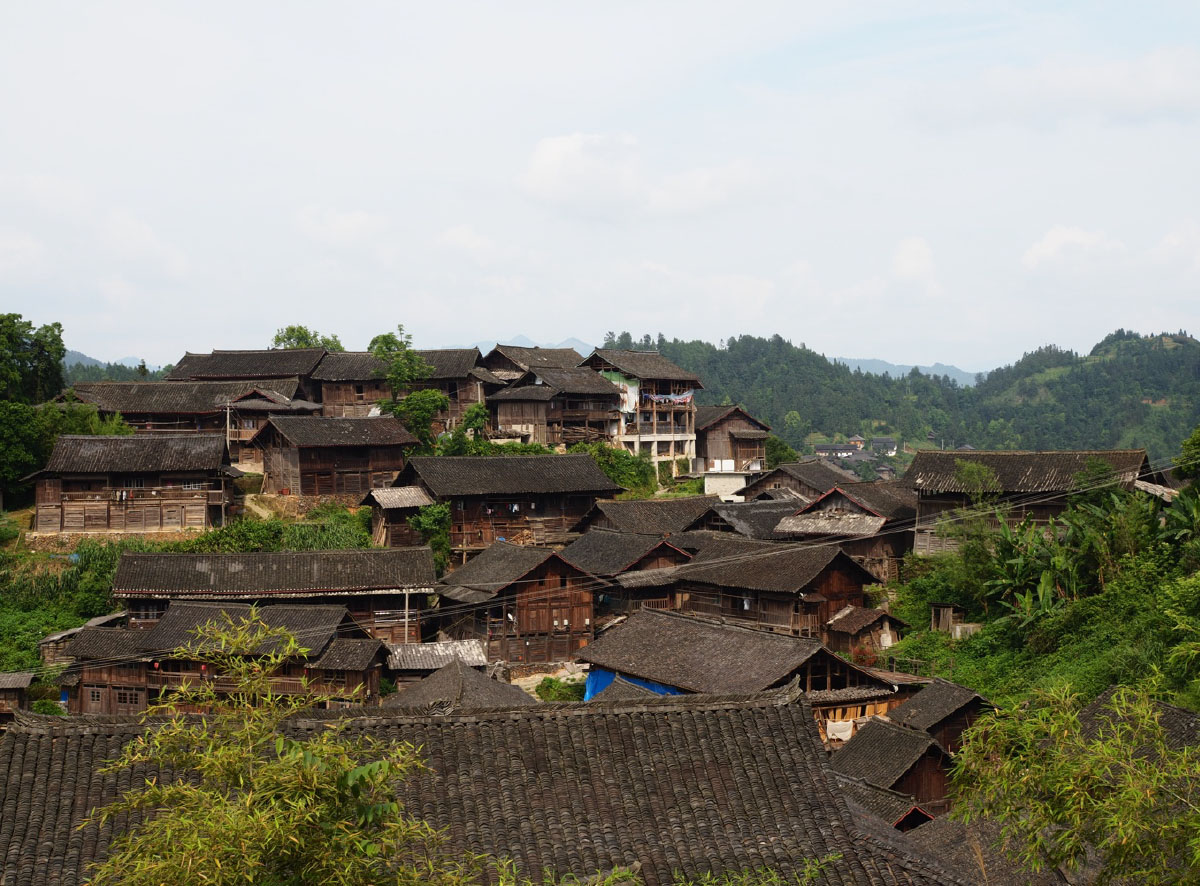 As the road climbs the scenery becomes more dramatic, a scroll of forested hills and deep valleys transitioning into a jewelled grandstand of rice terraces flowing down the mountainside in giant steps. Enter the village, you might see construction taking place on what will be Paimo’s upgraded bullfighting ring, a Miao custom.

As with many Miao villages the houses nearest the road tend to be more affluent and built from concrete. But venture deeper into the old vestiges of the village and the atmosphere is far more rustic. Homes are constructed of wood, with bird cages dangling from the eaves, stacks of firewood piled up outside, and strutting roosters keeping a wary watch for uninvited guests.

One of the village women, Zhang Shixiu, is a recognised master of batik. Her hillside home doubles as a workshop, inn and showroom displaying covetable table runners, bags and clothing for sale, all hand-crafted by women from the village.

A recurrent motif on Miao clothing and fabrics is the jinji, or golden pheasant, a creature interwoven with the origin myth of one of the eight Miao tribes in the region. As the story goes, precious seeds able to help the roving Miao tribe settle and work the land were sealed within a magic tree, but to procure them would mean death to whosoever attempted it. It was a Miao woman who heroically took the seeds, in spite of her husband’s protests. In so doing, she secured the future prosperity of her people, but was transformed into a golden pheasant for her trouble. 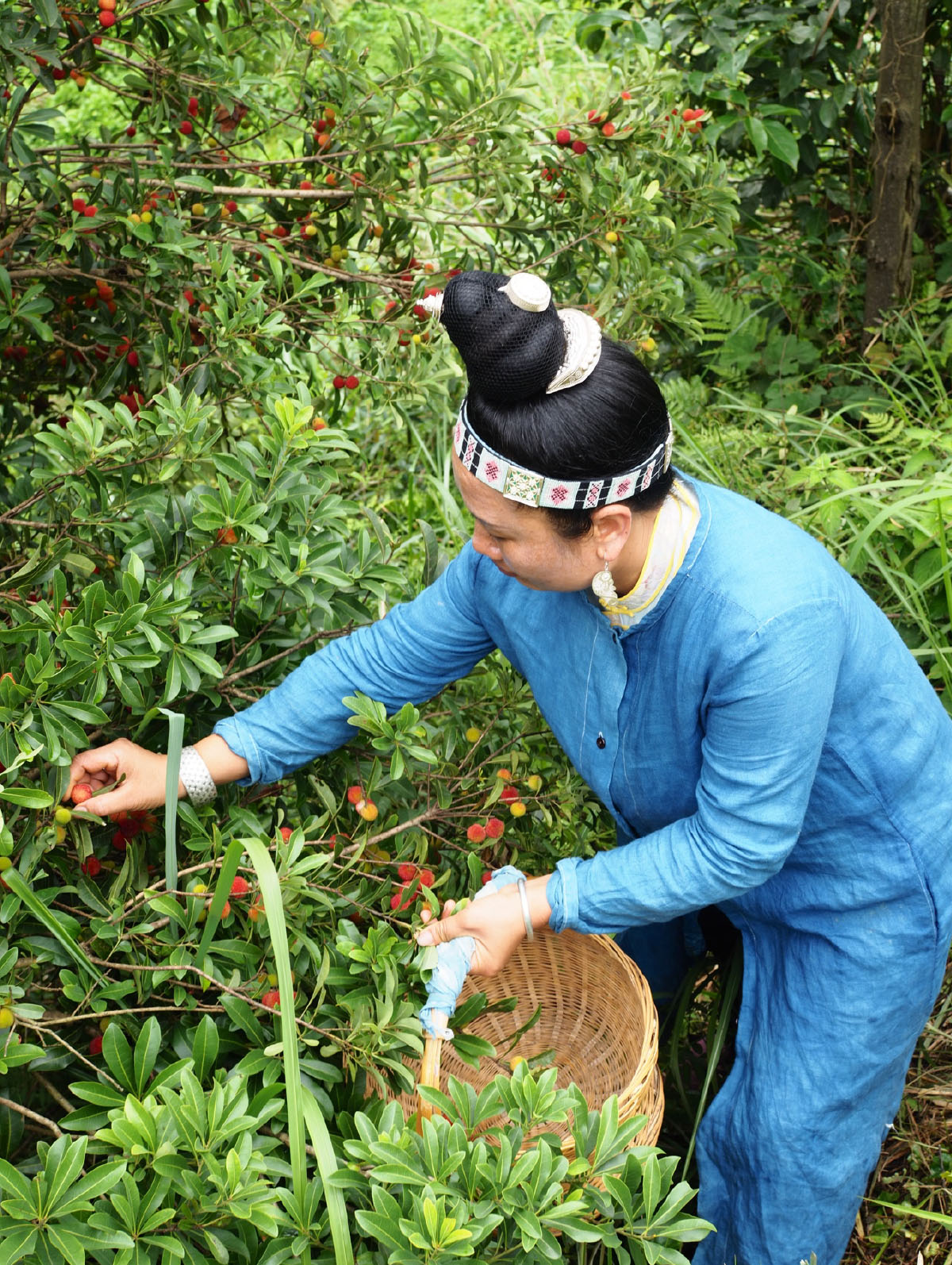 When you’re ready to eat, see if a villager will take you foraging for your lunch. In Paimo, the concept of food miles doesn’t apply – everything is local. Bamboo basket under one arm, Zhang skips up the steep hillside by her house. Only a snake, arrowing into the undergrowth, checks her progress. She picks yangmei (Chinese bayberries) from a tree.

Sour-sweet and floral, the tastiest have mottled magenta skin turning a deeper shade of plum.

Zhang gathers handfuls of mulberry leaves, famous in China as the food source of the precious silkworm, which she will mix with eggs and fry into fritters in the wok. Another delicacy is mujiangzi, tiny berries the size of peppercorns with a savoury lemongrass taste. The foraged fare, together with Paimo pork and rice, comprises a veritable countryside banquet once Zhang has worked her magic in the kitchen. A glass of her homebrewed sticky rice alcohol, infused with the roots of blueberry bushes for flavour, is the best wine pairing such a meal could ask for, and the very definition of the French term terroir. The steep, narrow alleyways of Fanweng village, built on the hillside

As a general rule when village-hopping in Danzhai, the harder a Miao village is to get to, whether accessed by remote, scraggy roads or perched higher up in the mountains, the more authentically antique the vibe. Fanweng Village, with its lofty views and teetering wooden homes built on stacks of stones, is almost like stepping back in time. A steep path runs between houses squeezed sociably together, the ‘street’ only steps wide.

Passing under the timber eaves you can hear the snuffle of animals inside. A public sign, painted in tall red Chinese characters on one of the houses, extols the villagers to work together to eradicate poverty. In a small shop – little more than a wooden booth – a Miao woman scoffs when told her village is beautiful. “Too poor,” is her reply.

Those Danzhai villages that are more prosperous tend to be attached to a particular craft or trade. Close to our base in Danzhai Wanda Village, a tourism and social enterprise project with international-standard hotels, Kala is a quiet, dusty Miao hamlet of cobbled lanes and sun-warped barns, with one unique attribute: birdcages. Look up at the eaves of any Miao house in Danzhai and you’ll probably spy several birdcages hanging there. The local Miao men raise small thrushes they catch in the countryside, and Kala is where the best cages are made, out of bamboo, by hand.

A workshop in the centre of the village demos the meticulous construction process, using simple knives and no adhesives. A basic birdcage takes a few hours to put together and sells for around 100 RMB ($14 USD). The finest, made from polished nanmu, a precious wood unique to China and Southeast Asia, and adorned with delicate silver decorations, costs a small fortune.

If your visit to Danzhai coincides with one of the region’s vibrant cultural festivals, so much the better. A must for roving foodies, the ‘Long Table Banquet’ is a delicious date in the Miao calendar, held at the end of summer (around September or October) in Danzhai villages, and also Danzhai Wanda Village, to celebrate the harvest. It's also often called chi xin jie, literally the ‘eat new rice' festival, where long tables are arranged through the center of the village and the whole population dines and drinks together, often for several days. Another festival, this time held at the beginning of the agricultural season, is the Fanggu Festival, where offerings are made to the gods for a bounteous harvest, and traditional activities take place including dance and music performances.

One of China’s least known abandoned places, the decommissioned Danzhai Gold and Mercury Mine

The biggest challenge when village-hopping in a place as remote as Danzhai is finding your way from place to place. Starting in 2021, Danzhai Wanda Village will be launching its own excursion program, enabling visitors to hire a knowledgeable local driver and choose an itinerary to suit their interests – whether that’s learning traditional Miao crafts, hiking to hidden waterfalls, or perhaps most excitingly of all, exploring an abandoned mining town hidden in a remote mountain valley. Established in the 1950s as a mercury mine, and later expanded when gold was discovered, at its height the town employed some 20,000 people and had a cinema, department store, school and hospital. These days it's all wistful, crumbling ruins, reclaimed by nature and looking like the ultimate post-apocalyptic music video set.

If you’re the type of traveller who prefers to go it alone, the local tourist board, together with Danzhai Wanda Village, have produced Danzhai Xing, a mini program downloadable in China’s WeChat app, with a detailed, bilingual map pointing out at least a dozen notable Miao villages as well as other natural sights and points of interest. The map provides walking and cycling advice, and it connects automatically to your driver’s sat nav, so there’s no chance of getting lost, and every chance of having a countryside adventure you’ll never forget.