Danzhai, a quiet little corner of rural Guizhou province, is bubbling with creativity. The local Miao people, one of China’s 56 officially recognised ethnic groups, have for countless generations practiced and passed on traditional crafts that form the backbone of their own rich cultural heritage. The region is awash with master craftspeople working with tools and techniques unchanged for thousands of years. 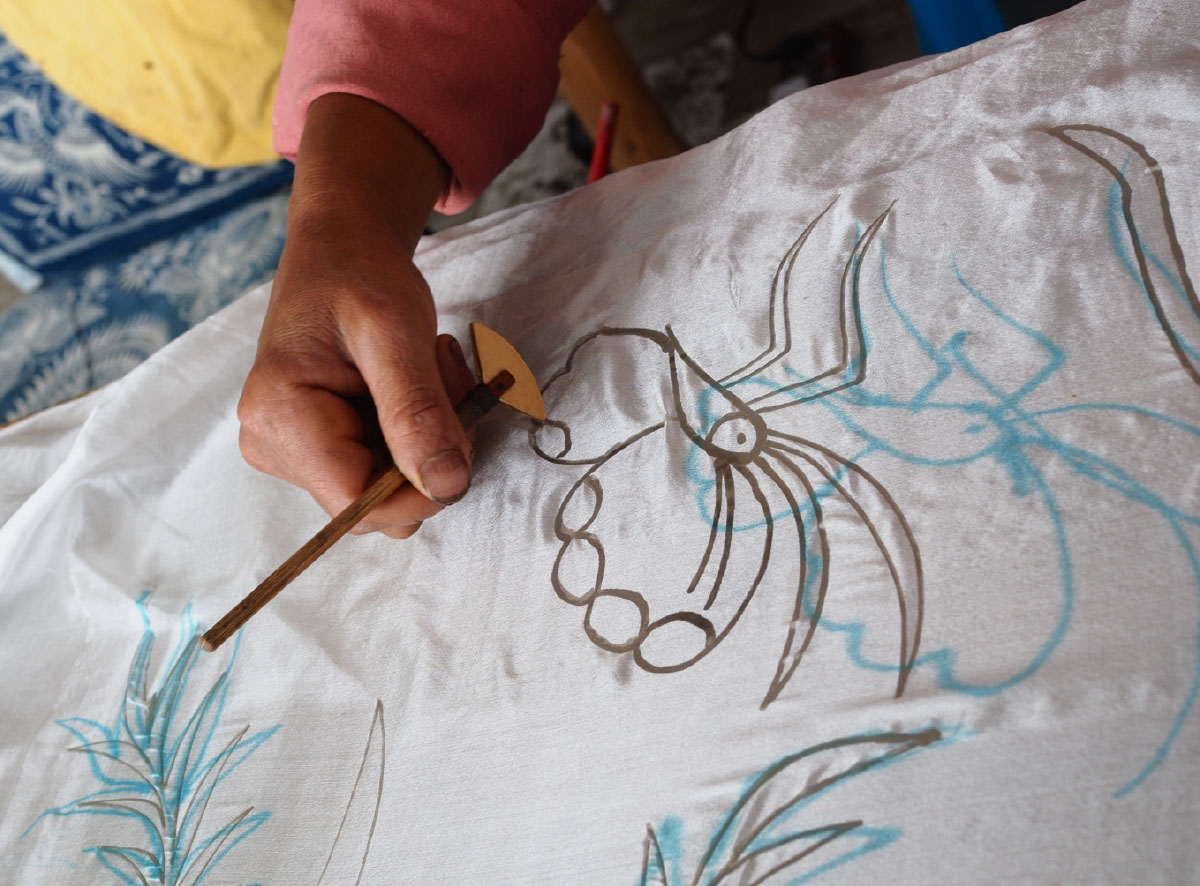 A craft gone global that some say first originated in Guizhou province is batik, a process of applying images and colour to cloth. Batik is an Indonesian word; in Chinese it’s known as la ran and in the Miao tongue, it’s called au tao. One of the top au tao practitioners in the region is Zhang Shixiu. She was recognised as a master of the craft in 2014, and given a grant by the local government as part of a drive to preserve and promote Danzhai’s intangible cultural heritage.

The concept of au tao is beautifully simple. Molten beeswax is ‘painted’ on to cloth, which is then dipped in a natural indigo dye so the unwaxed parts of the cloth take on color. Finally, the cloth is boiled to melt the wax away and reveal the finished image. In practice it’s a little more challenging.

Zhang’s village home, raised high on a hillside with dreamy views over the rice terraces, has been converted to include a batik workshop, dyeing room, and simple accommodation for travellers wishing to come and learn the craft themselves. You’ll be given a handkerchief sized square of white cloth with which to make the most of your artistic ability. Theworkshop is heady with the honeyed aroma of melted beeswax and crisp new cotton.

Using a curved brass knife designed to drip and disperse the melted wax, you’ll paint lines on the cloth. Next up is the dyeing, in vats of natural indigo dye made from a local plant. The more you dip, the richer the final colour, and the longer your fingertips will be stained a deep blue.

The most satisfying stage is the final boil, which melts away the wax and reveals your design.

Nearby, a local woman from the village, dressed in pale pink robes with a silver and cloth headband, might be painting an intricate wax pheasant onto a silk scarf. The finished piece will sell for around 500 RMB (about $70 USD) in Zhang’s own shop, or upwards of 2000 RMB (about $250 USD) if purchased by a middleman and sold in a boutique at Guiyang airport. Clothing that tells a story

Traditionally, almost all Miao women practice batik, creating their own household items such as bedding or clothing. It’s also customary for the Miao to create ceremonial costumes for themselves, including their own wedding dress and, somewhat forebodingly, their funeral shroud. Since establishing her workshop in 2014, Zhang employs some 200 local villagers, with around eight in the workshop at any one time. Empowering Miao women in the village to monetise their skills has helped make them more independent, financially and socially.

“Traditionally, Miao women were a lower social status than men, and many were and are illiterate,” says Zhang, “unable even to distinguish different values of banknotes.” The villagers are paid per piece they create, so they can fit the work in and around their other duties such as planting and harvesting rice (often with infants strapped to their back), household chores, cooking and raising children.

The finished pieces are sold on site or in shops like those at Danzhai Wanda Village, a tourist attraction and social enterprise supporting Miao culture and crafts. Zhang has also taken advantage of China’s advanced e-commerce technology, selling a range of batik products online, such as handbags, clothing and table runners, and even using livestreams to promote her wares. 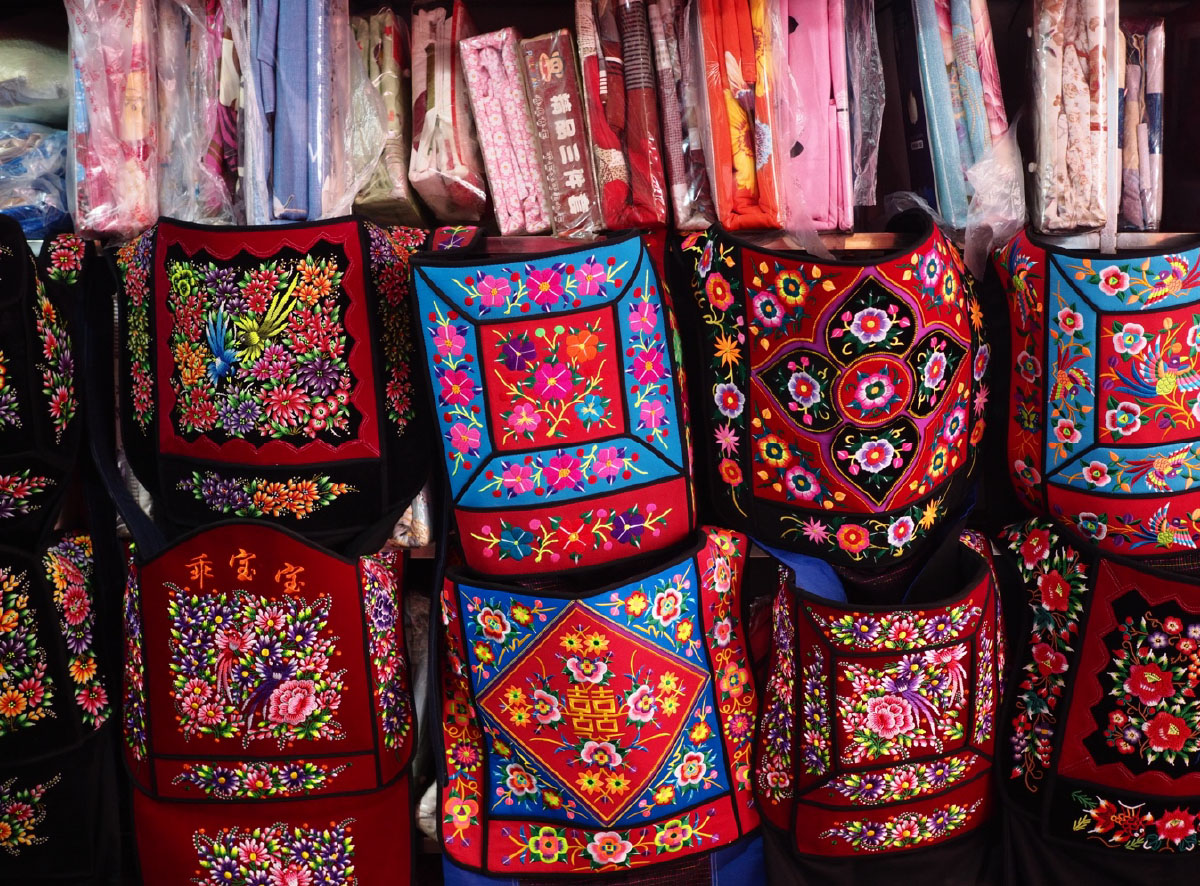 Several mountains away from Zhang’s village, a naturally eroded rock bridge spans the Nangao River, lending its name to Shi Qiao (Stone Bridge) Village. Upstream from the bridge, the Nangao surges forth from an enormous cave hung with stalactites. For centuries, this prehistoric cavern has served as a Miao factory floor for making superior quality paper, thanks to the alkalinity of the waters and the bark of a particular local tree. Papermakers sell their wares from wooden houses along a cobbled lane in the village.

Wang Xingwu, a local craftsman, has even supplied paper to the National Library of China and the Palace Museum (a.k.a. The Forbidden City), where it has been used to restore ancient imperial texts. The highest-grade paper Wang produces is as thin as spider silk and almost translucent; a dao (100 sheets) can sell for as much as 3000 RMB (about $400 USD). Wang’s shop, with its neat stacks of paper and dry, woody fragrance, is a haven for fans of boutique stationery. Some papers are coloured with natural dyes to create patterns while others are pressed with real flowers like artisan wallpaper.

Where once around 80 families practiced papermaking in the village, says Pan Yuhua, another Stone Bridge craftsman who learned the trade from his grandfather, now only about a tenth of that number keep the craft alive. Pan has made a name for himself locally by using a range of self-designed machines to streamline the traditional papermaking process while remaining true to the essence of the craft.

Along with batik and papermaking, another of Danzhai’s traditional crafts is embroidery using vividly colored threads, a process which can be observed at Village Story, a social enterprise established in an idyllic forest setting. Like Zhang’s batik workshop, Village Story employs local Miao women and seeks to hone their skills so they can work on pieces in their own villages, to be sold at the Village Story showroom or at shops in places like Danzhai Wanda Village.

By giving Miao women an income stream related to their traditional crafts, it also helps stem the tide of women leaving villages and following their husbands into factory jobs. 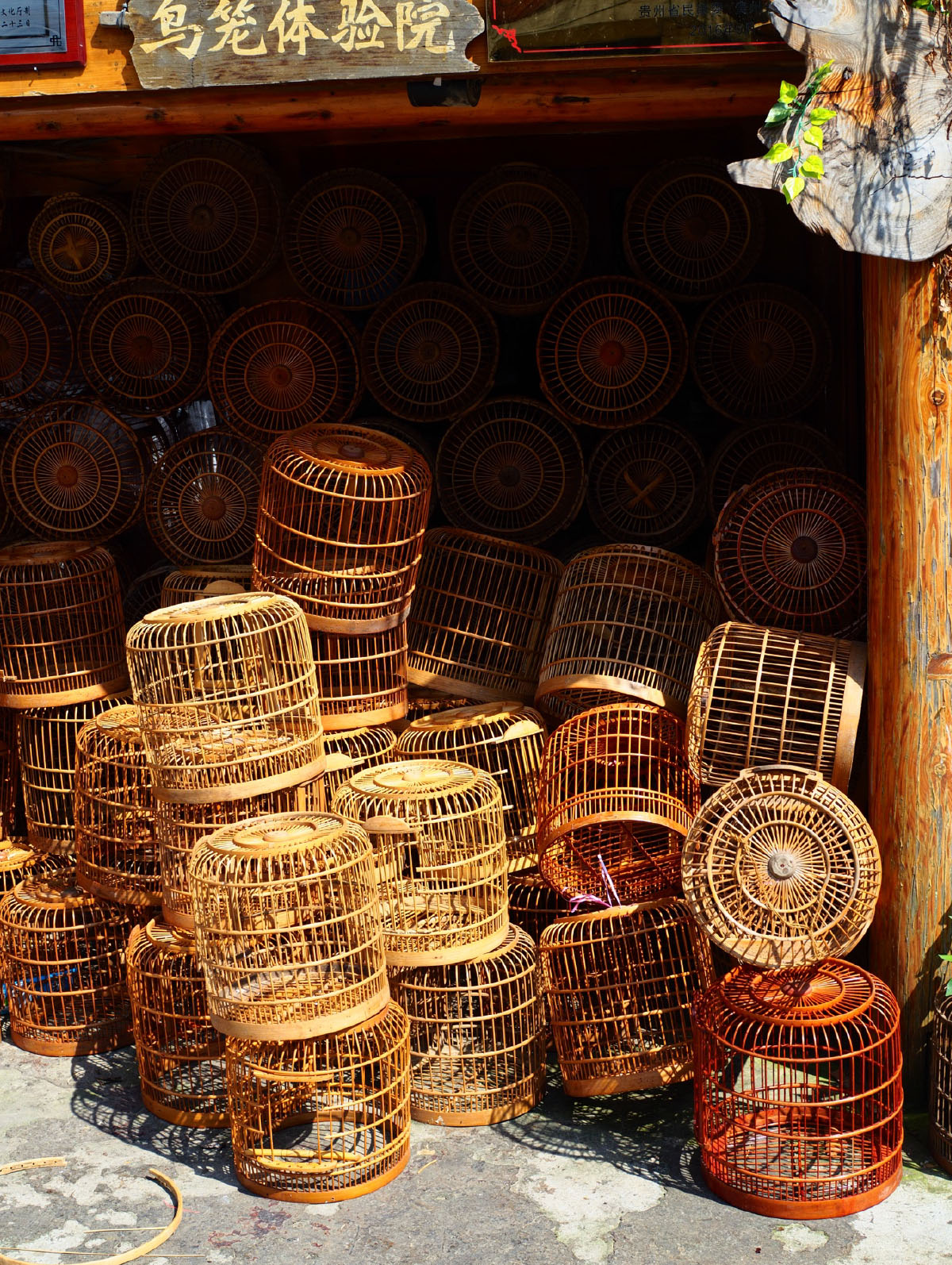 Protecting an endangered way of life

Preserving minority culture and customs in places like Danzhai takes the efforts of many, from passionate individuals to governments and corporations. But few have contributed more to the preservation of Miao culture than a Chinese anthropologist by the name of Wang Fenggang. With no written language of their own, the Miao people have relied on oral history to hand down their knowledge, customs and stories through the generations. The speed of China’s recent development put this system of knowledge transfer at a precarious juncture, prompting Wang to make capturing the Miao people’s ‘jiali’ (oral history) his life’s work.

Starting in 1972, he studied and recorded the history, philosophy, mythology and customs of the Miao, finally publishing several volumes in 2009 that run to more than 800,000 words. It’s a precious legacy, all the more remarkable given that, for much of his life, Wang, now in his mid 70s, has battled with Motor Neurone disease.

As Wang himself said in a recent interview of the vital importance of preserving intangible cultural heritage: “If ethnic culture is lost, civilization will only be left with an empty shell, the soul will die with it, the people will forget their history and won’t be able to see their future.”

Share this article on Facebook, Twitter,Linkedin and more.
Previous： Lonely Planet:Why Danzhai is Southern China's secret escape
Next： none