At times, the sparkling mountain landscape of Danzhai County in China’s Guizhou province does a good impression of the Swiss alps in summer. The sturdy homesteads of the Miao people, with their whitewashed walls, dark timbers and tapering tiled roofs, appear like chalets on the green hillsides. If anything, though, the colors in Danzhai are degrees more vivid. Even under heavy skies, the emerald sparkle of new rice shoots, planted in uniform rows on the bathtub-like terraces, ups the saturation of every vista. 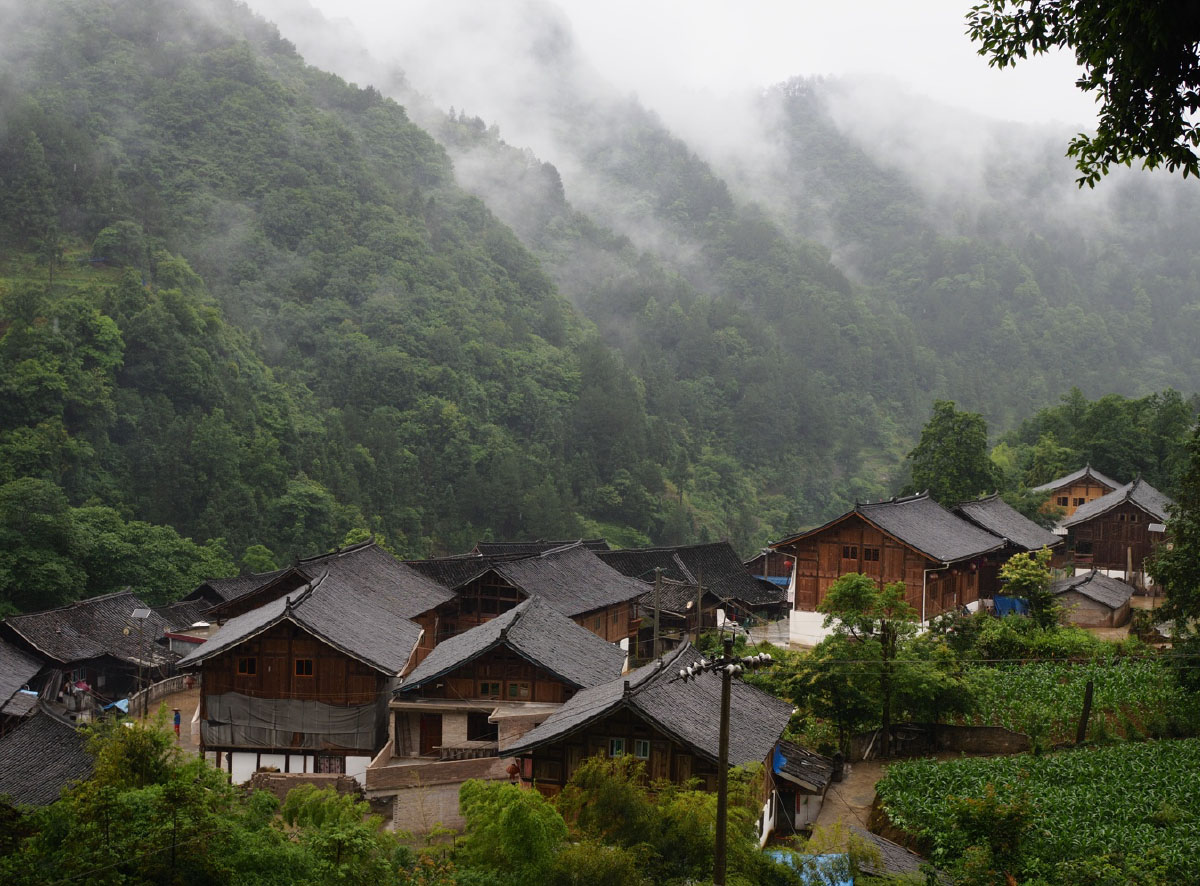 Hidden away in the east of Guizhou province, Danzhai is a rural county of some 172,000 people, many of them Miao, one of China’s 56 officially recognised ethnic groups. Few visitors had taken any notice of this overlooked region until 2017 and the opening of Danzhai Wanda Village, a tourist attraction and social enterprise project designed to bring visitors and prosperity to the region and to provide a platform for the promotion of Miao culture and craft. In 2020, Guizhou province was named to Lonely Planet’s Best in Travel list, with Danzhai as a suggested itinerary.

For travellers, using Danzhai Wanda Village and its attendant hotels as a base means one of southern China’s most untouched, culturally rich rural regions is now comfortably within reach.

Take some time to appreciate the vignettes of local life that will reveal themselves. Drive over precarious raised roads that slalom between rice terraces as Miao women pass, dressed in vivid indigo and blue, some with water buffalo in tow. Watch white butterflies dance over the fields like confetti in a breeze. Admire the mist that clings to the mountains like wool after it rains. Danzhai presents an endlessly photogenetic landscape, some 350undulating square miles of hills, valleys, rivers and sculpted rice terraces. You just need toget off the main roads and start exploring.

Miao men and women plant rice on the Danzhai hillsides

Without doubt the most iconic natural feature of Danzhai are its rice terraces. These giant steps are sculpted out of the hillsides over centuries by the industrious Miao, who, according to their own origin story, migrated here from the north around the time of China’s legendary Yellow Emperor some 5,000 years ago.

The first area cultivated by the Miao in Danzhai is known as the Gaoyao rice terraces, at its most resplendent around October when all turns to gold. Although not as steep or remote as other photogenic rice terraces in the county, Gaoyao is remarkable for its sheer size and breadth. A perch just off a highway offers the most all-encompassing view for shutterbugs, but it’s more fun to wander through Gaoyao village itself – a sleepy little hamlet with clopping horses and a general store that doubles as an inn – and access the terraces via an ancient spring that gushes forth ice-cold water.

When it comes to working the landscape, there’s more to Danzhai than rice. It also offers groves of blueberries, far plumper and juicer than supermarket varieties, and entire mountains carpeted in pine-hued tea plants. One such area is the Poverty Alleviation Tea Garden, established by Wanda Danzhai Village. It allows people anywhere in China or around the world to ‘adopt’ their own plot of tea, which in turn provides local employment and income for farmers, as well of shipments of your very own tea, green or black, at every harvest. 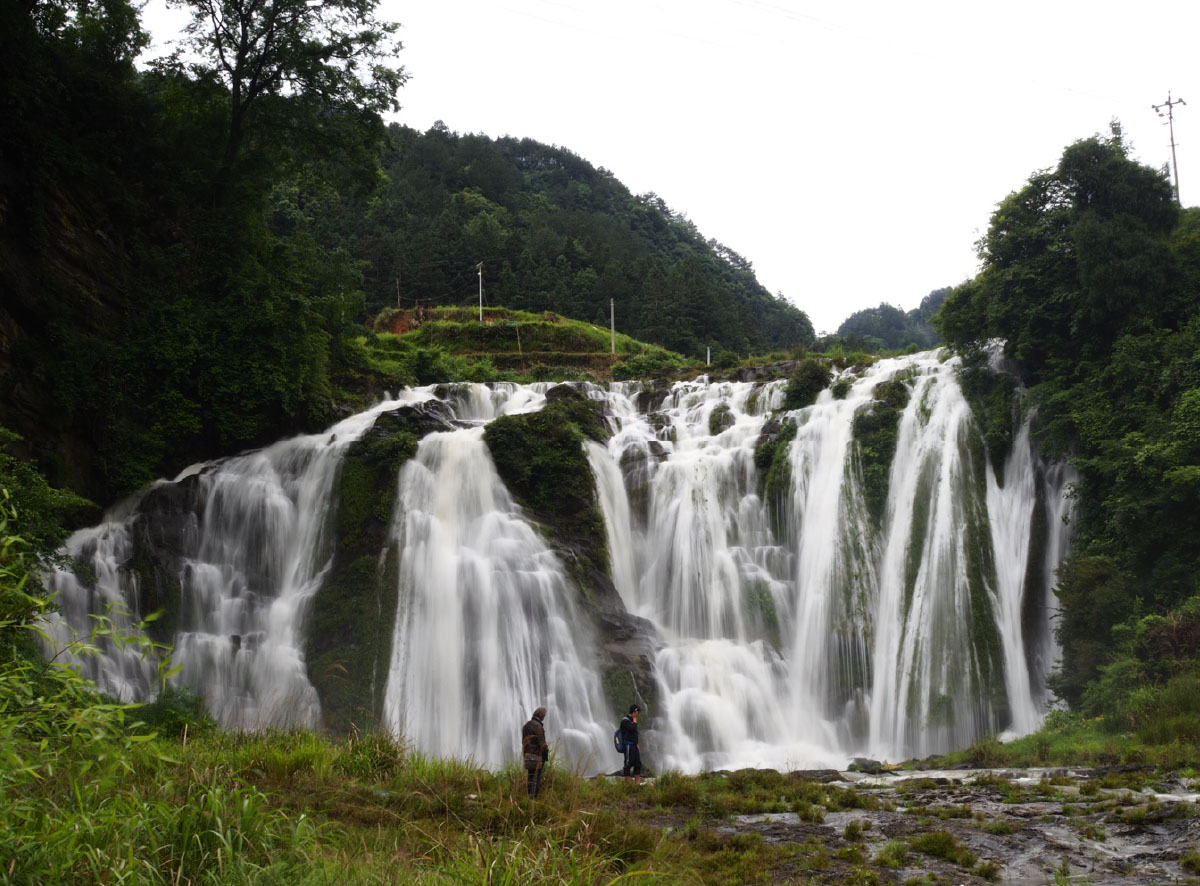 Danzhai’s Paiting Waterfall is roaring after a spring rain

Natural wonders without the crowds

Although the best way to explore Danzhai is simply to hit the road and go village-hopping, there are several sights worth making a special effort to seek out. Paiting Waterfall, if found elsewhere in China, would surely be furnished with souvenir stalls and a ticket office. Here, it’s an unmarked climb down through gurgling rice terraces over slippery steps. The falls reveal themselves around a hook in the river, a cascade some 200 feet wide and 130 feet tall.

Another falls, far taller and narrower, tumbles like a tap down the sheer rock walls of Diaodong Canyon, another natural wonder of Danzhai. Jurassic in scale and clothed in bushy tendrils of foliage that cascade downwards like the plumage of some enormous beast, the deep gorge takes a few minutes to drive, or about half an hour to walk through on foot.Danzhai’s landscape of forested mountains, ravines and rivers has enormous potential forhikers and cyclists, but until now, like much of remote rural China, the region lacked any properly designed and signposted trail routes. That is soon set to change thanks to a cooperation between Wanda Danzhai Village and a team of British trail designers, who have already completed what is being billed as China’s first world-class hiking trail, a 63-mile route through the mountains of neighbouring Hunan province.

Their plans for Danzhai, on hold until coronavirus travel restrictions ease, are equally ambitious, and include creating 60 miles of walking trails connecting remote villages via ancient mountain paths that have fallen out of use, as well as 30 miles of biking trails using the latest motorised mountain bikes.

The county seat, Danzhai town, is one of the few settlements in the region any larger than a village. What it might lack in rural charm it makes up for in delicious local eats. You can dine on everything from early-morning bowls of Guizhou rice noodles to late-night barbecued fish served over hot coals with pickled chillis and heaps of fresh mint – perfect with a bottle of cold beer.

Every six days the market comes to town, drawing Miao people from all over the county, who set out early from their villages laden with live ducks, fighting cocks in cages, puppies that will grow into the breed of hunting dog the Miao favours, baskets of purple bayberries, enormous goose eggs, and whatever else they hope to sell.

As well as being fabulous people-watching, the market is one of the few places in China where cash is still king, and you can’t rely on a smartphone for payment. Stalls sell traditional Miao clothing, hand-stitched baby carriers, wigs, wickedly sharp sickles, and bamboo rice steamers. There are tobacco sellers, outdoor dentists with just a chair and a few tools, and snack sellers hawking rice noodles and fried tofu.

On the outskirts of Danzhai town, Danzhai Wanda Village offers handy access to all of the region’s highlights by road, as well as boasting two international standard hotels, restaurants selling local delicacies and shops promoting genuine Miao crafts. The nearest airport, Guiyang, is two hours away by car, or you can catch a high-speed train from Kaili, 30miles away, with direct connections all over China (including an epic ten-hour journey to Beijing).

Considering that as recently as the early 2000s, at least half of Danzhai’s villages had no paved road access, it’s now easier than ever to discover this emerging, enchanting and still largely unblemished jewel of Guizhou province.