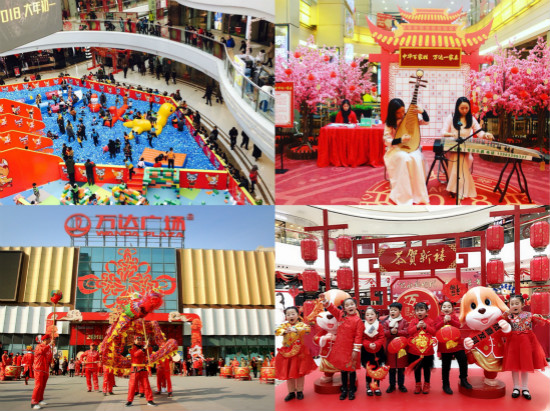 From February 9th to 21st, Wanda Plazas launched the “Light up Wanda Plazas, Fill China with Love” marketing campaign to celebrate the Spring Festival nationwide. Multiple campaigns featuring traditional Chinese culture were launched across the Plazas nationwide, which included New Year bazaars, new spring temple fairs and making new year wishes, together with the emotional marketing campaign of recording, “Video Speaking out Your Love,” and the promotion of the series of campaigns with related hot topic hashtags, which greatly boosted traffic and sales during the holiday.

On February 16th, which was the first day of the Lunar New Year, “Detective Chinatown 2,” produced by Wanda Film, was released globally. Within the first 6 days, the film was the box office champion, with a gross of more than 1.9 billion yuan, and the single-day box office for the first 5 days all breaking 300 million, setting several new records for a Chinese movie and becoming the comedy with the highest ever rating during the Spring Festival season in history. The rating of the film exceeded 9 on online social platforms including Taopiaopiao, Maoyan, and Weibo.

Wanda Parks held the “World China Year” series of campaigns nationwide that integrated Chinese and western styles, receiving 570,000 visitors during the holiday. The Parks not only provided the visitors opportunities to experience a carnival of cultures from around the world, the show of a dancing lion king, a new spring temple fair in the western style and a performance of lucky dogs giving good wishes for the new year, but also invited famous comedians on stage that provided visitors with a wonderful experience. The campaign was covered by multiple columns of CCTV, including Xinwen Lianbo and Live News.

Wanda Kidsplace Parks launched the “New Spring Free Play” campaign to celebrate the Chinese New Year nationwide, receiving a cumulative total of more than 30 million visitors across China. The campaign included several activities, including DIY hand-made activities in the traditional Chinese New Year style, a grand tour of the god of wealth, drawing dogs to bring good fortune, and a spring temple fair. Wanda Kidsplace also introduced the New Spring Big Gift Pack featuring “the Octonauts” that included 5 pieces in a set, which was popular among the parents and their children.

16 Hotels nationwide which are owned by Wanda Hotels and Resorts received peaks during the Spring Festival holiday. On the first day of the holiday, all the hotels were fully occupied, among which 12 hotels consecutively gained a 100% occupancy rate. The gross revenue of all the hotels exceeded the holiday target by 25%, with Wanda Vista Sanya gaining daily income of more than one million yuan for 6 consecutive days.