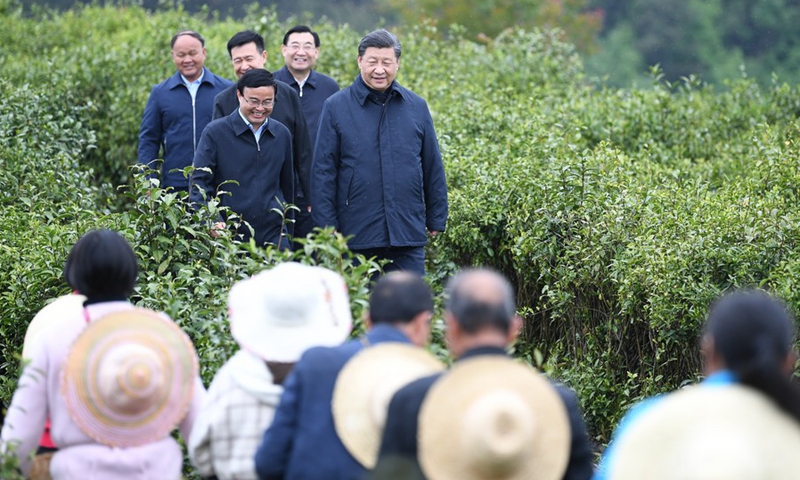 Chinese President Xi Jinping solemnly declared "complete victory" on eradicating extreme poverty in China at a national commendation conference on Thursday - four months before the centennial of the founding of the Communist Party of China (CPC) - marking another great miracle the Party leading the world's most populous nation has accomplished.

The convening of the commendation conference to honor the country's outstanding poverty alleviation fighters at this time showed China's development is entering a new phase with a more ambitious goal expected in the second hundred years under the leadership of the CPC, and the declaration of the victory can also boost confidence in the world which is on the hard battle with the COVID-19 pandemic, poverty and food scarcity, experts told the Global Times on Thursday.

China is expected to declare a moderately prosperous society in all respects in the middle of the year, which means that the country has achieved its first centennial goal on schedule in 2021. In 2049, China will achieve its second centennial goal of building "a modern socialist country that is prosperous, strong, democratic, culturally advanced and harmonious."

Xi, also general secretary of the CPC Central Committee and chairman of the Central Military Commission, hailed on Thursday that the achievement of eradicating extreme poverty is a miracle that shall "go down in history." He said the battle is won through joint efforts of all ethnic groups. 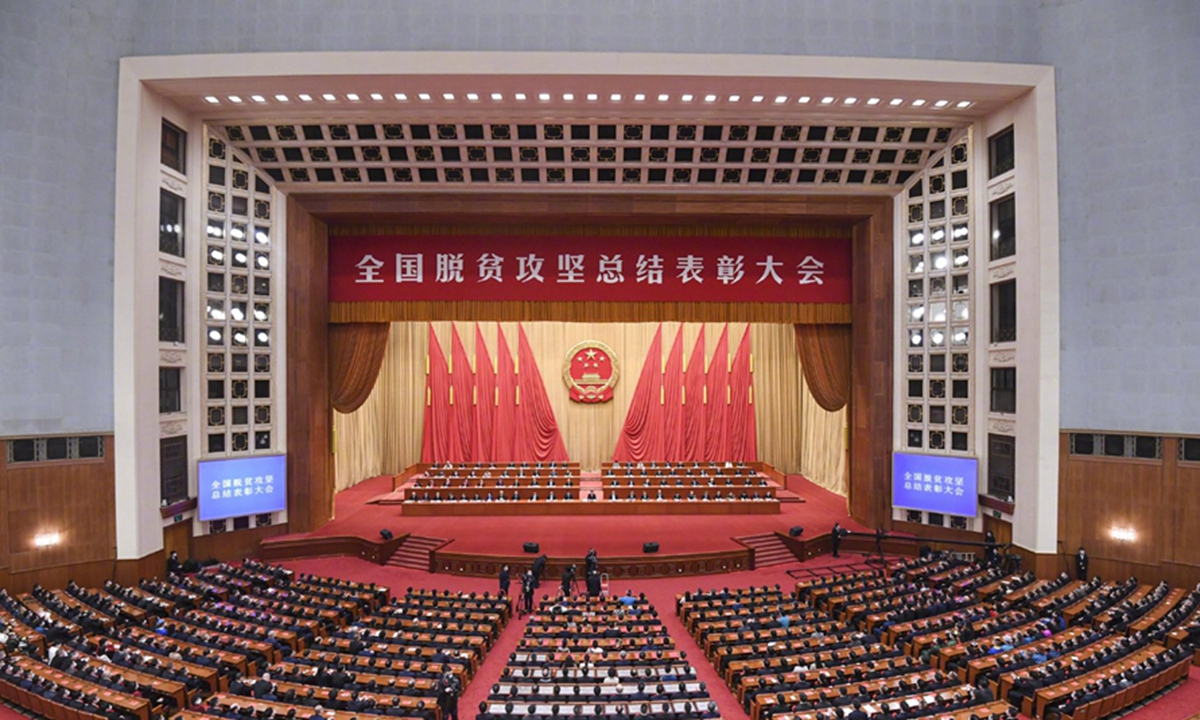 China has met the poverty eradication target set in the UN 2030 Agenda for Sustainable Development 10 years ahead of schedule. Since the 18th National Congress of the CPC held in 2012, 10 million people have been lifted out of extreme poverty each year on average in China - equal to the population of a medium-sized country.

Experts noted that the victory in the poverty battle laid a solid foundation for China to achieve its second centennial goal. On Thursday afternoon, China launched the National Administration of Rural Revitalization, marking China's overall victory in the battle against poverty and a starting point of fulfilling rural revitalization and a brand new life.

A grand gathering is held to mark the country's accomplishments in poverty alleviation and honor its model poverty fighters at the Great Hall of the People in Beijing, capital of China, on Thursday.

China has cultivated a spirit of poverty alleviation from the battle against poverty, Xi said on Thursday, which comprises the CPC's goals and spirit of the Chinese nation, and reflects patriotism, socialist ideas and Chinese values.

Several experts noted that the spirit showed the enormous power that the Party leading the Chinese people can unleash in building a better future. Since the founding of the People's Republic of China in 1949, the Party has made eradicating poverty its goal to better serve the people and lead them to a prosperous future.

We need the commendation conference to draw experience from the past and also to encourage the people to carry on the spirit to build our country, experts said.

Zhang Xixian, a professor at the Party School of the Central Committee of the CPC, told the Global Times that the spirit of poverty alleviation is the result of the efforts of two generations of people led by the CPC since the 1980s, especially over the past eight years.

The mention of the spirit of poverty alleviation today by President Xi at the commendation conference makes it a national level spirit, just like the Jinggangshan spirit and Yan'an spirit during revolutionary times, Zhang said, adding that "those spirits together form CPC's spiritual pedigree, becoming prominent features of the CPC and part of China's soft power."

"It invigorates the CPC, and is critically important for the Chinese people at a time when the Party will mark the 100th anniversary of its founding in just four months," Zhang said.

The spirit will become an essential part of civilized achievement for the CPC and lay the foundation for the Party to fulfill its next centennial goal, he noted.

At every important stage in its development, China has cultivated a different spirit, such as the Jinggangshan spirit and the Yan'an spirit during the revolutionary period, Yu Shaoxiang, chief research fellow with the Chinese Academy of Social Sciences, told the Global Times on Thursday.

China's achievement in poverty alleviation shows the advantage of the country's "whole nation system" - China can concentrate its efforts and resources to do major things and realize development, Yu said.

"The newly announced spirit of poverty alleviation is a summary of experiences from China's poverty reduction work over the past decades," Yu said. "The practice has come into theory, which can be promoted to help other developing countries in the world," he said, noting eliminating extreme poverty shows that China's development has entered a new era. 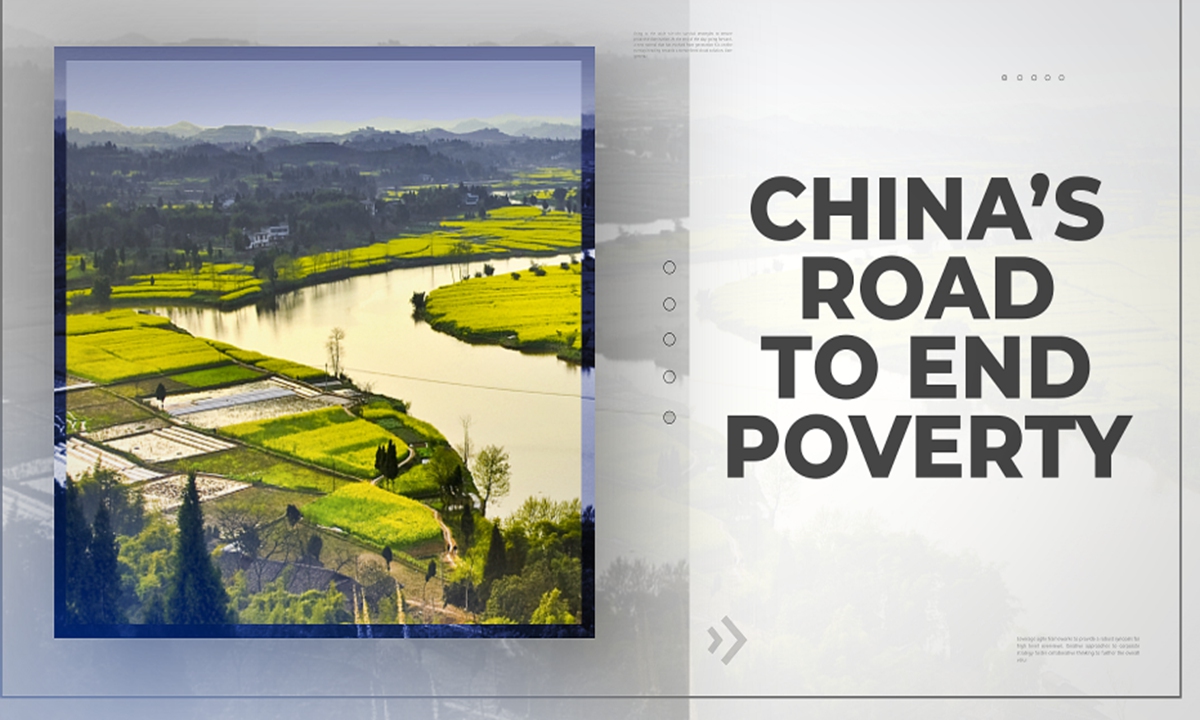 A total of 1,981 people, including 10 model poverty fighters, and 1,501 collective units were awarded at the Great Hall of the People on Thursday. The Global Times noticed that most of the awarded work at the grass-roots and the frontline of poverty reduction. Chinese conglomerates, including internet giant Alibaba, Dalian Wanda Group and property developer Evergrande, were also credited on Thursday for their efforts in eradicating poverty over the past years, with the contributions of building local characteristic tourism with sustainable environmental development and helping farmers sell farm products on e-commerce platforms.

Since late 2012, China has sent more than 3 million officials to impoverished villages to battle poverty on the frontlines, and selected over 500,000 officials as "first CPC secretaries" of villages. Other innovative and targeted poverty alleviation models, including "east-west pairing-off" cooperation with more developed regions helping less developed regions, mobilization of companies and society to help the impoverished, were also used in the nationwide poverty alleviation campaign.

Zhang Houxue, the first Party secretary at Daying village, Ziyun county in Guizhou Province, was honored at the ceremony.

"I am so fortunate to participate in and witness the battle beating poverty. I feel excited and honored to be a representative of millions of cadres who work on poverty reduction," Zhang told the Global Times.

For millions of Chinese who watched the live stream of Thursday's commendation conference, seeing the faces of those fighters like Zhang who paid arduous efforts in the country's poverty alleviation work touched their heart.

Xi presented awards and certificates to representatives of national honorary title recipients for their efforts in poverty reduction.

Among them, three of the 10 model poverty fighters - Zhang Xiaojuan, Jiang Shukun and Huang Wenxiu - have sacrificed their lives at the frontline of poverty reduction, and their representatives attended the conference.

Jiang Shikun, Party secretary of Qinglong county in the mountains of Southwest China's Guizhou Province, died from a heart attack in 2016 at work, aged 46.

Huang Wenxiu, who served as Party secretary in Baini village, Baise of Guangxi Zhuang Autonomous Region, after graduating from college, died in a torrential flood in June 2019. She was only 30 years old. Her father was captured on camera weeping during the Thursday ceremony, which touched a lot of viewers.

"Wish you good health. The country and the people will not forget your daughter!" read one netizen's comment, as "salute to the poverty alleviation fighters" became a trending topic on China's social media.

Xi said the country has created a "China example" of poverty reduction and made great contributions to global poverty alleviation.

China has lifted 770 million rural residents out of poverty since the beginning of the reform and opening-up over 40 years ago when calculated in accordance with China's current poverty line, accounting for more than 70 percent of the global total according to the World Bank's international poverty line.

In addition, China is actively helping other developing countries to fight poverty.

Tang Lixia, an expert at China Agricultural University, told the Global Times on Thursday that China actively shoulders its responsibility as a big power in helping other developing countries.

Tang held seminars for village heads in some ASEAN countries and she also went to Tanzania to help local farmers improve their techniques. "When we provide assistance to these countries, we also bring to them those good experiences and mature development methods China has accumulated. China's experiences are not only important to China, but can also serve as references for other countries."

"The most important thing is China set poverty alleviation as the primary goal," John Ross, a senior fellow at the Chongyang Institute for Financial Studies of Renmin University of China and former director of Economic and Business Policy for the Mayor of London, told the Global Times. He noted that China's victory on poverty reduction shows that socialism is something that delivers for people. "It shows the correctness of the policies which have been pursued," Ross said.

Ei Sun Oh, a senior fellow at the Singapore Institute of International Affairs, told the Global Times on Friday that China's experience for the world in terms of poverty eradication is a combination of the government's determination and the accountability of numerous officials, combined with creative solutions by various corporations and organizations, in conjunction with the willingness of those in poverty to extricate themselves.

"I think all three factors are important - government, various creative solutions by various organizations and corporations, as well as those who used to live in poverty. They must all work together to make this happen," he said.

China, being the world's most populous country and having achieved this total eradication of extreme poverty, is a very significant achievement and I think we look forward to sharing some of China's lessons in this respect, especially for other developing countries, he remarked.

Share this article on Facebook, Twitter,Linkedin and more.
Previous： Enterprises support poverty alleviation through industry creation, upgrading and transformation
Next： none