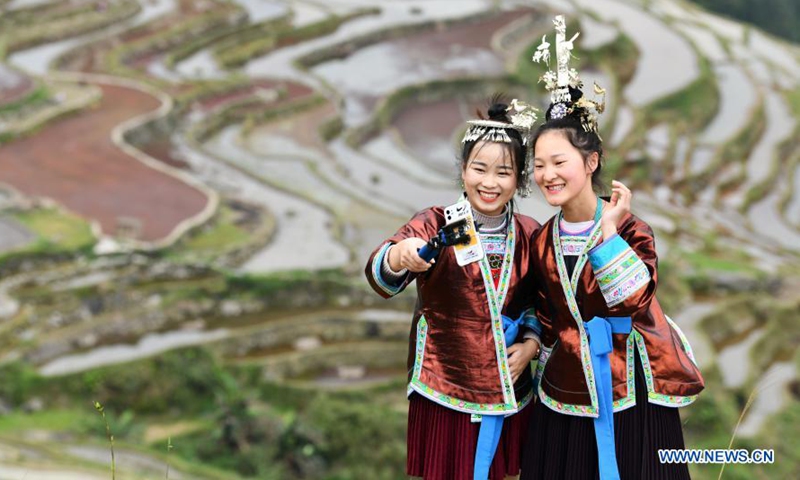 Wu Xianyan and college student Liang Qiongying promote local tourism via live streaming at Jiache Village, Jiabang Township in Congjiang County of southwest China's Guizhou Province, April 19, 2020. Guizhou, which used to be a provincial-level region with the biggest population of poor people, has lifted more than 9 million people out of poverty since 2012.

Chinese President Xi Jinping on Thursday presented medals, certificates and plaques to 1,982 personnel and 1,501 collectives as China's model poverty fighters, of which more than 500 recipients were enterprises and representatives of enterprises, coming from industries such as the internet, education, agriculture, energy and aviation.

"In the process of participating in poverty alleviation and rural revitalization, enterprises actually build, upgrade or transform related industries, from which they will profit," Sun Wenhua, director of the China Agriculture Industry Chamber of Commerce at All-China Federation of Industry and Commerce, told the Global Times on Thursday.

Most well-known Chinese private enterprises, like Alibaba Group, Wanda Group, Didi Chuxing and Geely, have participated in the mighty task and their work has been recognized.

Since the launch of reform and opening-up in the late 1970s in China, 770 million impoverished rural residents have escaped poverty. China accounted for more than 70 percent of global poverty reduction over the same period.

The remaining 98.99 million impoverished rural residents in China were all lifted out of poverty in the past eight years.

The country has invested nearly 1.6 trillion yuan ($248.1 billion) of fiscal funds into poverty alleviation over the past eight years. Enterprises also invested in relevant projects to create industry clusters or boost industrial upgrading or transformation, and they provided jobs to help support the poverty battle.

"Poverty eradication is a difficult task for most developing countries, and China's exemplary success is significant. The Chinese government's ability is often mentioned by the outside world, but the other aspect that is often overlooked is that China's market-oriented reforms over the years provided a foundation to solve the problem of poverty alleviation," Sun noted.

Wang Yu, chairman of Shanghai-based private carrier Spring Airlines, told the Global Times on Thursday that having a stable job is the most precise way to alleviate poverty and ease generational poverty.

Wang was one of the distinguished individuals picking up honors on stage on Thursday.

The airline aided students from poverty-stricken areas financially, recruited staff in those regions, and flew in affluent tourists from big cities to poor areas.

Since 2014, the airline has carried 800,000 tourists to less-developed areas in Central and West China from its 37 airlinks.

E-commerce giant Suning, a private enterprise that received an award, has donated more than 2.3 billion yuan in cash and materials to targeted poverty alleviation and rural revitalization.

Another example is Danzhai Town in Southwest China's Guizhou Province, where Wanda Group invested more than 2.3 billion yuan in a tourism town. It received 19 million tourists over a three-year period, driving the tourism income of Danzhai Town to 12 billion yuan and increasing the incomes of 58,800 poor people in the county.

For instance, China Eastern Airlines launched the "poverty alleviation route" from Kunming to Cangyuan in Southwest China's Yunnan Province in 2017. The 15-hour trip on the ground was reduced to a 50-minute air trip. This added 800 million yuan to local GDP and created 12,000 jobs in 2019, the Global Times learned from the company on Thursday.

"Poverty relief is an important issue not only in China but around the world. As a young technology company, Didi Chuxing is inspired to be part of the national and global endeavors to end poverty," the car-hailing company said in a statement sent to the Global Times on Thursday.

In 2019, Didi Chuxing's China business created 13.6 million flexible job opportunities, and 350,000 people previously living in poverty now make an average monthly salary of over 5,000 yuan on the company's platform. That income put these people into the middle class category in China.

According to Alibaba, in the past three years, 832 state-level poverty-stricken counties have generated more than 270 billion yuan in online sales through Alibaba's e-commerce platform through its agricultural poverty alleviation projects.

Although many companies were not recognized rewarded as models, countless enterprises both large and small have participated in the battle. Foreign enterprises and entrepreneurs, such as Starbucks, Airbus and Nestlé, also contributed.

Nestlé told the Global Times that it has supported the rapid transformation of the dairy sector in China in close collaboration with local governments, financial institutions, input suppliers and universities, both local and international.

In recent years, dairy farming has evolved from mostly small farms with just a few animals to large professional family farms with as many as 1,000 cows.

A key Nestlé initiative was the establishment of the Nestle Dairy Farming Institute (DFI) in Northeast China's Heilongjiang province. The DFI is a platform for the training and development of Chinese dairy professionals.

"There is a great opportunity for rural development in the next stage. After the nation's poverty alleviation work is completed, the next task will be comprehensive rural revitalization, which should involve the active participation of all social forces," Sun noted.

Share this article on Facebook, Twitter,Linkedin and more.
Previous： How a London-based editor became mayor of a small village in China’s Guizhou province
Next： Xi hails miraculous achievement of poverty reduction, inspiring nation for higher goals with spirit of poverty alleviation